The nose cone avionics arrangement went through quite a few iterations as it was more or less designed around the 4000mAh battery. However it proved to be quite a challenge mounting the battery on the centerline of the rocket / nose cone and still being able to fit the other components. Although the 86mm 5:1 Von Karman nosecone is quite spacious it does require a central M6 threaded rod. When tightened, the aluminium nose cone tip and bulkhead securely clamp the nose cone in between the two parts but basically divides the internal space in 2. The reason I didn’t want to place the battery back off-center was because of the (expected) inertia roll coupling. Actually, a relatively heavy battery pack mounted in the very top of the rocket is the worst place to position such an off-center object. With the traditional mechanical mounting methods (which use a combination of bolts, nuts, threaded rods, angle bars, u-profile and G10 plates) I wasn’t getting a satisfactory design. So in the end I drew up a “dumb” (very simple) 3D print which perfectly met all requirements. 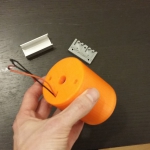 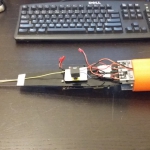