On Saturday 04.02.2018 we organized a small static test party. I wanted to test the KILO 5GXL motor measuring both thrust as well as chamber pressure. My current set up only allows for chamber pressure and to determine the Isp I needed actual thrust readings for which I needed the static test stand from LD. Weather was overcast, approx. 1°C and lightly snowing every now and then.

Setting up and testing went quick with interfaces tested and prepared at home. After a quick discussion it was decided to test the KILO 5GXL first and secondly the smaller 2G motor by LD. Both motors used the same propellant and similar motor hardware. After a quick 5 sec count down the 2+2gr CuO/FeO3/Mg thermite igniter / booster charge popped and a small flame started licking from the nozzle. After a 3 second delay the motor quickly roared to life and continued to burn for 8s. Post examination showed the motor hardware had held fine. After a brief study of the data it showed there was a subtle erosive spike followed by a flat to regressive burn.

Motor disassembly showed the liner + grease at cemented itself to the casing. Guess I will have to use a more heat-resistant grease next time. Forward closure, nozzle retainer and nozzle had held up fine and after a quick sanding in the lathe they can be used for the flight motor. The nozzle did have nasty slag which is difficult to remove. In the forthcoming days I will try to dissolve the aluminium slag in caustic soda as per LD’s instructions. 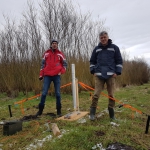 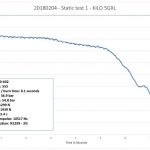 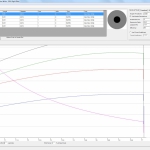 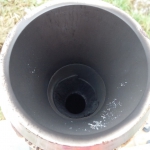 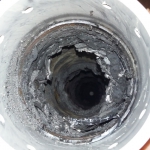