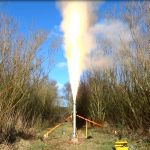 On February 3rd we had a nice day of testing with blue skies, little wind and 6° Celsius. Two motors were to be tested both with the goal of having high thrust and short burns so they could be used as a booster for the forthcoming 2 stage rocket.

The first motor made by LD was a stretched monolithic 12 point star grain. Thanks to a different supplier a new, 1200mm long, phenolic liner is now available with the same dimensions as the PML 3″ phenolic body tube which fits perfectly inside our 80mm ID motors. This motor contained a different formulation than the Slow White propellant. Now containing 65% AP, 10% Al with RIO as burn rate modifier and some additives like BDO and TETA for cross linking and bonding agent. The motor showed a clean  burn with little erosive burning, high thrust and short burn. By the looks of this we now have a superior booster for the forthcoming 2 stage launch. Second motor was a full length PML phenolic liner, 6 fin true finocyl of which the construction photos and notes can be found here. This core shape consisted out a thin 6 fins around a central core AKA finocyl . Since erosive burning at start up was expected the motor was designed to burn progressively. Core Mass Flux (CMF) simmed at 1.7 lb/sec-in². I erroneously installed a 1000psi pressure transducer whereas normally I use the 2500psi version. So the pressure transducer maxed out at start up. However the load cell picked up the thrust spike at 7000N. Obviously this motor is not flight worthy but nonetheless a nice data set was obtained. For future finocyls it is not recommended to use thin long fins but shorter and wider fins as typically seen in large monolithic finocyls such as the Qu8k rocket.

I also tried a new ignition mix of 3gr BP, 6gr CuO/RIO/Mg thermite with 12gr of fine APCP shavings which resulted in a pressure spike of 55bar but no ignition. Clearly it is easier to light this APCP heavy on Al with a longer burning, pressureless ignition mix. The traditional thermite only igniter in some heat shrink, kindly provided by LD, together with some APCP shavings sprinkled into the motor saved the day and reliably lit the motor.