On Friday the 13th, (an omen of bad luck?) JVDB & LD tested the KILO 4GXXL motor. This motor has an extended casing to hold more propellant when compared to the KILO 5GXL. The 4GXXL uses a Black Cat Rocketry 3″ phenolic tubing for liner and casting tubes. With its four XXL bates grains, the motor geometry is designed to have an even more simulated, progressive burn profile to limit core mass flux erosive burning at start up. However due to the erosive nature of the Slow White propellant a relatively neutral burn is expected.

Chamber pressure and thrust was independently measured. Despite typical Dutch cold and wet weather 4°C, setup op the test stand went smooth. After a 5sec count down the remote controlled ignition button was pushed and the motor roared to life with a 7-8 second burn. Thrust profile was relative neutral. A respectable total impulse of 14.500Ns was achieved for a 86mm OD motor. The motor was easily disassembled with the silicone grease now also applied to the inside of the casing and not only to the outside of the liner. Post inspection showed a cracked liner over the entire lenght – we have seen this happen before and quite typical. Unfortunately the nozzle cracked as well and required to be replaced for a new one. A potential cause for the nozzle cracking  could be a bit of play between graphite nozzle and the nozzle retainer which cause the nozzle to slam against the retainer upon pressurization or simple the increased thermal expansion of the graphite because of the bigger reload. The nozzle had over 5 previous firings. Thrust curve shows this is a suitable candidate for the GIGA IV sustainer motor. 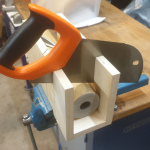 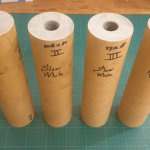 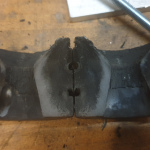 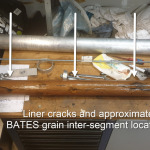