On Sunday 26th of January the KILO hybrid finocyl core burner motor was static tested on a 66/12 reload. This 66/12 propellant is a modified version of the Slow White propellant where the 4%Zn was replaced with 4% AP resulting in 66% AP and 12% Al at 78% solids. The result is a very docile propellant even in the Kn 600+ range with good pour-ability, density and improved Isp. Furthermore it remains slow burning though a bit faster than Slow White.

Similar to the KILO 4GXXL, this motor uses a Black Cat Rocketry 3” phenolic airframe tube as liner (longer than standard PML phenolic tubing) into which the 66/12 propellant was directly cast to form a monolithic grain. The rather unconventional core geometry consisted out of a finocyl in the top half and a core burner at the bottom half (nozzle) of the grain.

The idea behind this was to test a more direct thrust shut off and reduce tail off time for potentially using a pourable HTPB liner, spin casted directly into a casing. This will prevent buying expensive custom phenolic liners, splicing liners for greater length etc. For such a HTPB liner to successfully protect the casing against the hot burning flames, it requires the motor to directly shut off without extended burn time due to tail off and possible burning away the HTPB liner. For this to happen to goal was to have the top half of the grain burn away in the same time as the lower half. The lower half experiences erosive burning and burns away faster than the top in a conventional core geometry causing tail off. Hence the finocyl was placed on top with the core burner in the bottom of the grain maximizing web thickness near the nozzle.

Chamber pressure and thrust was again independently measured. Weather was dry but cloudy at 3-4°C. After a 5sec count down the remote controlled ignition was pushed and two distinct ‘pops’ were heard, indicating the charges ignited after each other instead of one uniform ignition charge. Thrust profile showed an expected erosive spike at start up with an simulated progressive burn and an unexpected 3s tail off. The motor reached a total impulse of 16.500Ns with a Isp of 217s. This was approximately 2000Ns more than the previously tested KILO 4GXXL motor in the same casing. The motor was easily disassembled with the silicone grease now also applied to the inside of the casing and not only to the outside of the liner. Post inspection:…..

This particular thrust curve shows that, with this core geometry, it will likely not be used as-is for the sustainer reload on GIGA IV. However with some modifications (like shortening the finocyl and lengthening the core burner – to reduce the erosive spike at the beginning) it might be a possible to get a flyable thrust curve. However a 100% core burner minimizes the erosive spike for this motor configuration while keeping the peak chamber pressure at the end of the burn within acceptable (casing) limits. This time accepting both erosive burning and thrust tail off for this slow burning propellant. 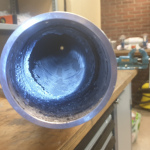 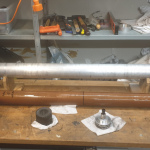