One of the design changes for the GIGA IV is a common bulkhead to join the previously central avionics bay of GIGA I-III (in control of recovery) with the updated nose cone electronics (camera and GPS tracker). With this modification there is no longer space for a separate main parachute compartment as can be expected in a normal HPR dual deployment set up. Instead a single 2ft kevlar Rocketman parachute is deployed at apogee. Considering landing at sea or in a forest, the resulting higher decent rate is therefore unlikely to damage the rocket.

Since optionally landing at sea was used as a starting point, a lot of consideration went into the design and production of this concept to ensure both the avionics bay as well as the nose cone electronics are air / water tight.

The camera lens is glued / sealed in place through the bulkhead wall. For a next revision the lens band of the bulkhead is to be a bit longer than the current 13mm since only a thin edge remains due to the 12mm hole. 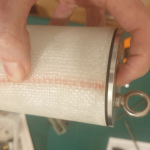 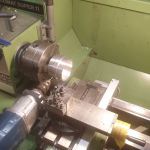 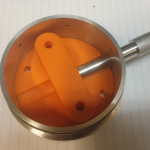