On Friday 28-05-2021, LD and myself set out to launch the Intimidator 5 on what I think is it’s 8th flight but frankly lost count a bit and not all flights were properly documented on this site.

Weather was mostly sunny, little to no wind from the N-NE direction. Launch rail was set at 32° azimuth and with an 85° elevation. The rocket carried an experimental anti-roll payload consisting out of 2×2 counter acting nozzles powered by a 25gr CO2 cartridge reduced to 2bar and 2 solenoids. Once roll would exceed 30° one of the solenoids would open to counter the roll. The system did function throughout the flight but, as can be seen on the onboard footage, did not counter the roll motion completely.

Further more the students from Inholland launched their Aquilo rocket on a 4G KILO motor with a KNSB RIO reload. Furthermore they tested a 14.000Ns APCP motor with a monolithic grain and tapered core of which LD provided the reload for.

Most of the build and rocket prep was done by LD this launch, which was  much appreciated. 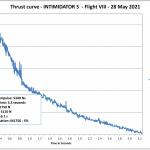 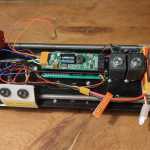 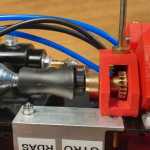 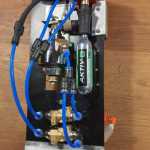 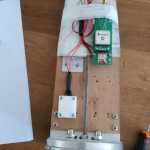