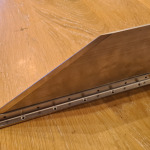 During the pandemic in 2020-21 it became clear that in order to get a new design fin bracket machined I was getting too dependent on external factors. Hence the decision was made to become self-sufficient with the conversion of a manual HBM BF 25 / G0704 mill/drill into a full blown DIY CNC milling machine. However that endeavor is actually an entire different chapter which I may or may not write a page about. Rest assured it took many hours of learning and a year long journey for machining a fin bracket with a perfect 43mm radius.

There are some dynamics at play during the supersonic speeds of the GIGA sustainer.

For the 86mm diameter rocket fins I’m using 100x3mm extruded flat profile which limits my fin height to 100mm. Reason for using extruded flat profile over a free-from fin cut from a 3mm plate is that the material is readily available, holds tight tolerances and is quite stiff. The fins are cut to size (4 stacked fin blanks) using an industrial metal cutting band saw with the swivel head set at 30-60°. I did not have good experiences with using a sheet metal shear as the 60° cut would twist the fin.

From the above picture some of the considerations can be recognized for improving the GIGA IV fin design: 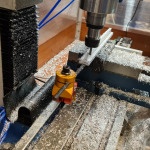 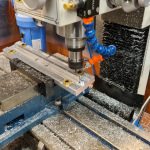 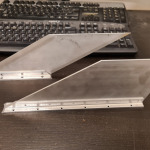 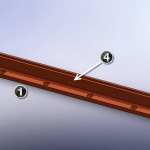 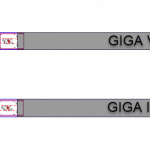