BIG DISAPPOINTMENT –  this is how the first launch day of 2013 can be shortly described. With a swooping cold front from the North the launch conditions were challenging.

On Thursday 25.04.2013 all looked fine. The afternoon was scheduled for rocket preparations, pre-flight rocket inspections and the launch rail was assembled ready to be erected on Friday.  With the preparations finished we headed out to our hotel. Unfortunately the NAVRO & NERO stayed in separated hotels. Weather on Thursday was nice and sunny. The customary cold beers were being served at the café terrace until 21:00 after which we were called in for our dinner. Although the weather forecast predicted a change for the worse, we were still quite confident that it would not be any problem. What could go wrong?

On Friday 26.04.2013 we woke up and the fog was hard to miss from our hotel window. Temperatures plummeted from comfortable 16-18° C to 7-9° Celsius with a 4-7m/s wind blowing from the North. On top of that it never stopped drizzling throughout the day and the rain ranged from a drizzle to a hefty shower. The weather reminded us of an unfavorable launch in 2004. Clouds were estimated to be at 200m. With only a few active flyers on the NERO side we had some trouble with erecting the tower to the rather unusual 20° azimuth. Lessons learned: set up the launch rail on Thursday and focus on flying rockets on Friday.

H13d – Due to these time consuming difficulties the first rocket, the H13d (already the 5th flight because of oddly named  “H13a2” ) was not launched until approximately 11:45. The H13d was chosen to be launched first because the limited height it would reach and we could check our launch rail bearings and wind drift while under parachute. The flight was flawless including the drogue deploying at apogee and perfect deployment of the main at 300m. This was because the tapered silk sock containing the main parachute was kept inside the airframe until the pin puller released the tether to the drogue which pulled out the sock & main. Likely landing spot as sent by the GSM GPS tracker: 52.395231 005.927229 but by that time the rocket had already landed for some time and it could also be possible that it already was in the back of a military jeep as the coordinates are right on top of a off-road track.

DECA V – By that time a fellow NERO rocketeer LD decided not to risk his 3+km rocket and did not fly. Quite understandable when seeing the extensive Arduino payload in the nosecone. The same risks could be opted about the DECA V two stage with a simulated apogee of 3,4km. However with a Beeline GPS in the nose cone and a GSM GPS tracker attached to the shock cord and no experimental launch day scheduled within the coming moths I decided to fly the two stage rocket anyway. Eventough only the first 200m could be witnessed. Rocket prep was easy, the GPS trackers were confirmed to function and within the hour the DECA V was sitting in the launch rail. One problem popped up which would later be the cause of flight anomaly. Because of the rain the plastic nosecone became wet. Normally the payload module is activated though the nosecone end after which the nosecone is put on and secured by aluminium tape. This had worked flawless during the last 4 launchs however this time the tape holding the nosecone to the airframe would not stick due to the rain. A quick fix was deemed to be found when the aluminium tape was exchanged for duct tape. After the launch area was cleared the recovery and sustainer ignition electronics were powered on & armed (quite a tense moment with the sustainer motor being a mere 30cm away). But the reliable RDAS Tiny functioned just fine. Secondly the Cesaroni igniter was inserted into the J-1055 Vmax and the DECA V two stage was ready for launch at 12:45.

After a quick count down the Cesaroni Vmax hauled the two stage rocket quickly out of the rail into a straight and stable ascent, quickly disappearing into the clouds. The seconds were counted down and right on que (considering the 3s coast delay and 2 additional seconds for distance to be covered at the speed of sound) the sustainer came up to full pressure. With a muffled sound and absolutely no visual confirmation the sustainer was thought to be on its way to 3,4km. However, only seconds into the flight we stopped receiving the Beeline GPS coordinates (later the cause was tracked to the nosecone separating from the airframe and taking along the antenna and half of the Beeline GPS) and about a minute into the flight the rocket was spotted under parachute at an unlikely angle from the launch rail. This made recovery of the sustainer easy but straight away stopwatches were checked as the rocket landed way too soon. But nobody knew what happened because of the clouds. Landing location of the sustainer as sent by the GSM GPS: 52.395768 005.922133. While writing this report the booster is still misplaced and has yet to be found. Recovery of the booster should have been simple trusting on the Cesaroni motor ejection set at 7-8s with the recovery harness consisting of Kevlar and the parachute wrapped in a Kevlar burrito. Nobody saw it landing.

After analyzing the onboard camera footage and extracting still images from the video with Quicktime it was discovered that just before or at sustainer burn out the nose cone separated from the rocket sending it into and unstable flight with lots of spin. The spin and curved trajectory likely being cause by a previous camera hole looking out the airframe now serving as a jet exhaust with 300m/s air rushing in from the top where the nose cone normally would be. A video still of the nosecone & Beeline GPS antenna fly by at the left of the rocket can be found below. JV had to cancel his two scheduled test liquid/liquid (N2O/kerosene) engine test as the rain would short circuit the electronics. JV did show the novelties on his engine the day before and being:

Our fellow rocketeers from the DARE & NAVRO also launched some rockets. One DARE rocket had a nice and impressive long burn sugar motor. The rocket was constructed out of CNC cut aluminium center rings and rolled sheet metal. Although flimsy to the touch the rocket seemed to fly high and straight.

Although no catastrophic failures this was a launch day soon to forget. A launch day should be fun, this launch day and weather certainly was not. 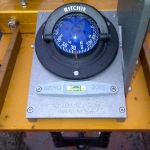 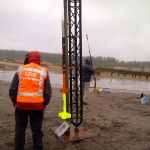 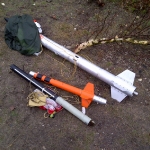 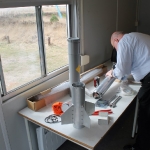 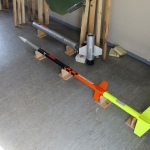 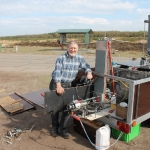 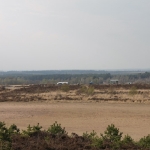 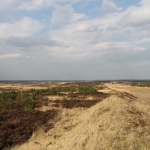 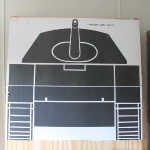 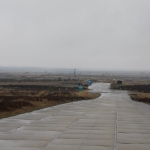 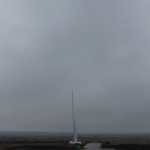 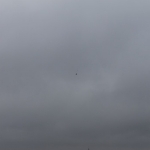 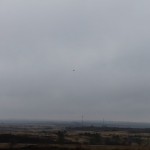 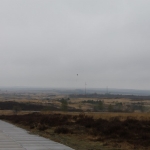 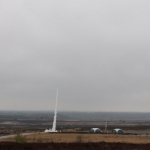 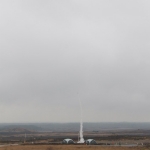 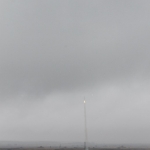