May 20th, was the first launch day of the 2016 season. Instead of all Dutch rocket organizations having their own separate launch days at the OTCVust, this time it was a combined launch campaign from the DARE, NAVRO, NERO & T-Minus with 12 rockets and 1 static motor test. We successfully flew the Intimidator 5 for the fifth time on a KNSU 2% RIO reload, with a “talky” GPS tracker by LD as a payload. Furthermore LD static tested an AP/AN/HTPB reload in the KILO 4G motor hardware.

I had no plans flying the Intimidator 5 at OTCVust this year but since the new launch rail trailer had to be end-to-end tested we opted to fly it anyway. This launch would be a good opportunity to test the launch rail before heading to Poland by the end of this year. The continuous drizzle throughout the morning and a SE wind made for uncomfortable launching conditions especially while waiting. Launch rail was set at 45° azimuth / parallel to the road and with an 80° elevation to cancel out the rocket would weathercock over the crowd. Launch window of the I5 was around 11:00 and after a bit of misunderstanding /  communication with launch control it was launched shortly after that.

For the potential use as a booster motor in a 2-stage configuration I’m looking for maximum thrust out of the KILO 6G hardware. With the previous KNSU PG reload the thrust was a bit disappointing. For this reload all known tricks in the book were used. KNSU as a fast(er) burning candy propellant and RIO (red iron oxide) as an additive to increase burn rate a bit. Grains came out nicely with an average ideal density of KNSU of 99,+% likely due to the fine RIO filling up any voids between the KN and SU.

The KILO 6G motor featured a re-designed nozzle after the st. st. nozzle with graphite insert showed cracks at the throat. Likely caused by the poor nozzle design we had to work with in the first place due to the st. st. blank we had 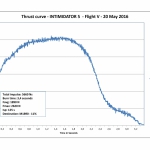 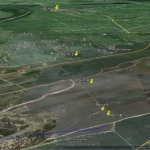 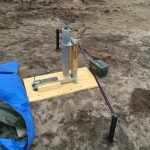 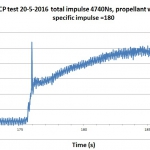