“We had a bad day” and blew every thing we brought into small pieces. This pretty much sums up our launch at LRE 2017. But taking it from the beginning:

Friday – we had quite an eventful trip to Poland. Starting with a skidded truck at road construction works, secondly a truck which crashed through the middle crash barrier on the high way, a trauma helicopter landing right in front of us, a damage tire on the trailer which needed to be replaced and in Poland the high way simple ended due to construction works. Anyway, with a fair bit of delay arriving at Drawsko Pomorskie it made the cold beers and pizza taste even more rewarding.

Saturday – Due to the weather on Saturday (cloudy with showers and not to mention cold) we decided to postpone our launch to the second launch day on Sunday as the weather forecast was considerable better (sun with some clouds). Saturday was used to locate and retrieve LD’s CHIRON 2 rocket which unfortunately lawn darted the year before. This was caused after a “remove before flight” pin to arm the electronics was forgotten to be extracted from the rocket. Hence the flight computers never armed and the flight was doomed. The Talky GPS did provide an accurate 3D plot and by means of extrapolating the coordinates an accurate point of impact could be given. With the 4WD SUV we drove into dense forest and planned for a long and heavy hike through swamps. However we were pleasantly surprised that this part of the forest was crossed with many rudimental paths and with the help of Google maps we were able to drive close to the calculated point of impact. Literally within minutes we walked right up to the ill-fated CHIRON 2 rocket which was sticking out of the ground a mere 100mm. Although it soon become evident the rocket was considered a total loss, we starting with digging a large hole to remove the +3m long rocket. We were hoping to retrieve the onboard camera SD card as these cards can stand a lot of abuse. It soon became evident that all the rocket avionics had been reduced to 5x5mm pieces and only a small piece of the Mobius PCB was eventually recovered (it mentioned Mobius on it so it was easy to determine). Congrats LD for the exactly locating the position of the impact.

Sunday – Weather improved a lot overnight and we were having our morning coffee in the sun. At night, temperatures dropped below freezing and we have been storing our motors in the trailer. More on this later. We were informed we would be launching at the Mielno range so we drove up there around 8:30. After setting up the 7,5m launch rail facing East with an azimuth of 87° we started prepping the rockets. During prepping DB launched his beautifully crafted, carbon fiber, 22mm, boosted dart on a Cesaroni Vmax M-reload. Simulated apogee around 13km. After an impressive lift off all communications with the dart were lost which is still MIA. He was able to successfully recover the booster. With the GIGA rocket and it 12G motor MEOP pushing the limits on the casing it was decided to launch the CHIRON 3 rocket first as it already successfully flown in the past. After setting up all tracking equipment and a 5 second count down from launch control, the rocket over pressurized in a spectacular fashion quickly after ignition. Taking away the upper 2/3rd of the launch rail along with it. Flabbergasted with the outcome we collected the parts and assessed the damage to the launch rail. After some re-rigging works we inserted the 3m long GIGA rocket in the remaining 2,5m lower launch rail. Thereby having an effective, 2 button, guidance of about 0,7m. Since the motor would pull 20G’s and not having any alternatives the rocket was launched anyway with the spectators positioned at a safe distance. After leaving the rail at about 8-10m the GIGA too over pressurized in a CATO. No means of recovery and all parts plummeted to earth.  A post inspection showed the 9V battery has been broken loose from its holder. Many parts including the recovery section and the nose cone were found.  The nozzle retainer, nose cone tip and 3 out of 4 fin brackets remain to be found. Parts of the graphite nozzle were found but scattered what must be in tens of pieces. So after a rough day we left at around 15:30 to arrive around 2:00 in the night.

So….. what made both motors CATO and will the CHIRON and GIGA fly again? 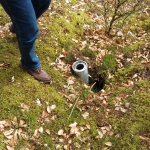 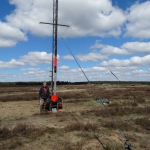 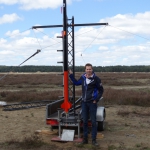 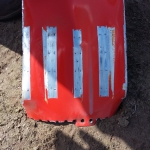 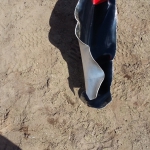 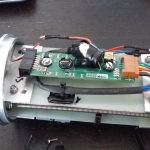 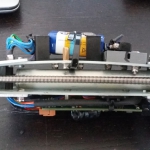 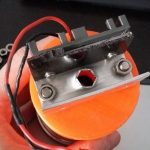