On this page you can read about the NERO Launch Day 27-05-2005. Although I’m couldn’t be present on the launch day (I was on a 6 month trainingship in Singapore) I translated a report which a fellow NERO member gave me.

Due to the perfect weather and blue sky the entire flight could be followed by eye. On board was a R-DAS so air pressure and acceleration were measured. The payload section contained 3 gyroscopes. The military set up their actively controlled Doppler radar again so we can verify the data from the R-DAS and Gyroscopes. With the radar measurements and R-DAS data we can qualify the gyroscope set and make a reconstruction of the entire flight. 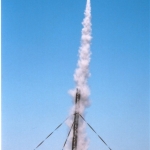 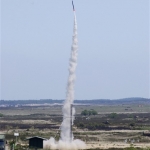 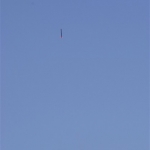 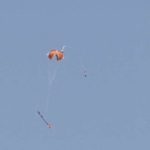 The second stage of the H10a lawn darted

The 2 stage H10a didn’t performed as well as the H11d. The rocket had a hard time leaving the launch tower and wobbled a lot during the first part of it’s flight. Separation was perfect. The ignition of the second stage was also perfect. Right on cue. Due to the wobbling the trajectory of the 2nd stage wasn’t perfectly vertical. Two people managed to track the rocket to apogee with binoculars but failed to see if the drogue deployed and lost sight afterwards. The 2nd stage lawn darted because the main wasn’t pulled out by the drogue. The drogue probably got ripped off because of due to the high horizontal velocity. The Doppler radar tracked the 2nd stage down till 800 km/h after that it lost track of it. At that moment the rocket was still accelerating at that moment. Fortunately it still landed
inside of the military premises.

At this moment the rocket still isn’t found and can take up to months to recover. The upper stage is considered to be a total loss.

Most likely situation is that the drogue got ripped of due to the high horizontal velocity at apogee. What is still unclear is why the rocket lost aerodynamic stability. This rocket passed all our stability test and the NERO actually has a lot of experience with 2 stage rocket. The H7 series had quite a number of successful flights. The instability wasn’t expected at all and further analysis will hopefully provide more data. R-DAS data is lost but we still have the data from the Doppler radar which the military provided. Last launch showed that R-DAS information and Doppler radar are within 1% of each other. So the Doppler radar can be of great help evaluating the H-10a flight. 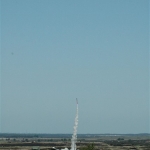 After video analyses the most likely cause will probably be found and the lesson will be applied into the new H10b. This is the first rocket since 1996 which the NERO lost. Small mistakes causes large consequenses with AER. But as FdB put it (freely translated from Dutch): “If you can’t take it, you should start collecting stamps”.

On friday morning 3th of june the military found the 2nd stage of the H-10a rocket. At first glance the electronics compartment looks ok but after inspection the following became clear:

The place of impact was 2660 meter from the launch rail. After a quick calculation of LvV this gives an effective pitch of 50°. 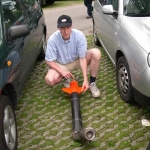