The DECA rocket was launched. The details are given in the launch report.

Specification / Pre-launch documents for NERO use

This rocket was designed to be propelled by the 4 grain – DECA motor. Evaluating several designs, long and hard thought has gone into the basic design. The design goals: modular, simple, easy to construct yet very effective minimum diameter rocket.

First is was decided that the rocket would need a dual stage recovery because it would not be much more complex than a single stage recovery and the rocket has the potencial to reach high altitudes. I liked the simplicity of a drogueless descent and the fact that the rocket is broken up into several pieces connected with tubular kevlar thereby reducing its inertia. Although the drogueless descent means a relative high vertical descent, it has the benefit that the uncontrolable horizontal speed is almost completely eliminated. Therefore for the first stage of the recovery the rocket will break up at apogee near the motor coupler and for the main parachute to deploy the nose cone will be ejected.

Electronics / payload compartment would be between the motor and the main parachute. The compartment sealed and protected from hot ejection gassed by means of o-rings located at each end. I did not wanted to secure the floating b

The entire harnass is constructed out of 3-4mm tubular kevlar with M6 stainless steel eye bolts.

Apogee break up at the motor, main deployed with nose cone popping off. 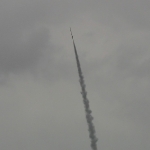 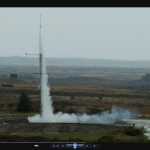 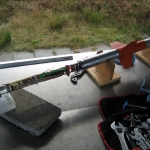 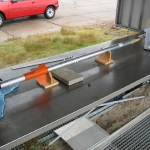 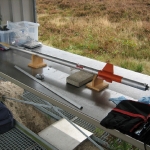 Both the apogee as well as the main parachute charge consisted out of a straw filled with 1,0gr of 3F commercial BP