The BOOSTAR-ONE / GIGA III two stage rocket successfully flew to +15km and all parts were safely recovered. However not without a fair bit of luck on what proved to be non-flight-critical failures. 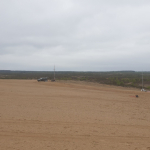 This LRE spring launch proved to be quite the paradox. On one side, the days & weeks leading up to the launch showed ideal weather: clear blue skies and little wind. On the other hand this also meant the launch campaign could get scrubbed to the back up date in May due to the fire hazard. However, there was a slim change that we would get rain on Saturday morning. So after an uneventful journey on Friday we enjoyed our traditional beer and pizza. This time on the outside terrace at a comfortable 25° C. At the end of the evening some rain dances were made while meeting up with DB and the TU Wien team. Never before have we wished so hard for rain on a launch day. In the end, the temperature dropped to 10 °C overnight and it rained in the morning. After the approx. 50 persons had mustered at the meeting point the launch was declared a GO at 10:30. We decided to set up the long 7,5m launch rail for this 4m rocket. Elevation of the rail was set according to the 87° downwind instruction of the PTR. Reason for this was to cope with the higher winds which were in opposite direction of the ground level wind. For us, we expected that the two stage rocket would weather cock a bit and would straighten up to 0°. A last moment addition was made in the field by duct taping a spare Kenwood APRS transceiver to a tripod mounted Yagi antenna pointing straight up. This proved to work perfectly receiving all APRS packages including both the apogee package as well as the landing APRS package. We had a bit of go-fever after the booster tracker didn’t get a GPS lock and stopped transmitting seconds before the first count down. This resulted in the right call to abort the first launch attempt as it would be impossible to find the booster back. After a power cycle of the tracker it started transmitting again and after a 5s count down the launch button was pressed.

It took considerable longer for the booster motor to come up to pressure than anticipated. But after what looked like an eternity of increasingly smoke and flame licking, the 31kg rocket lifted off straight and true (no weather cocking) from the rail only to quickly disappear in the lower clouds. Seconds later we could hear the roar of the sustainer motor and the voice over from the Talky GPS was happily reporting that the rocket was gaining altitude. This indicated the whole sequence of booster, coupling device, head end ignition of the sustainer and the stability calculations had worked. However, shortly after apogee the TalkyGPS for unknown reasons power cycled / reset itself and the voice over remained in its idle / start up mode. Luckily it kept sending APRS messages with the position of the rocket. With the portable APRS receiver connected to a Garmin handheld GPS we knew the lateral distance between us and the rocket which was km’s away. Meanwhile a PTR team spotted the booster landing in the forest line nearby the launch position and we kept receiving position packages from the booster tracker so we were expecting it to have landed in a tree. We quickly drove up to the location of the last received sustainer position and sure enough the sustainer had landed safe and undamaged in the grass. The parachute cords where quite twisted and surprisingly the aluminium nose cone tip was missing. The RDAS beeped out a 2-beep fault code. After having recovered the sustainer we drove up to the booster rocket which landed much closer. Luckily it was lying on the ground. Apart from a dent in the leading edge of one of the fins it too had landed safely and undamaged. Once again we would like to thank the Polskie Towarzystwo Rakietowe (PTR) for enthusiastically hosting this LRE spring 2019 event and sharing the best launch location for AER in Europe. 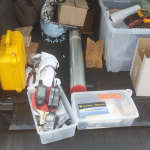 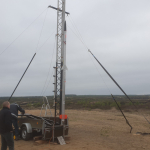 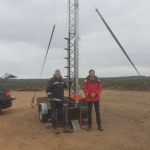 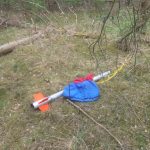 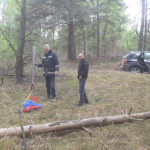