After a great boost, the BOOSTAR-TWO / GIGA IV two stage rocket flew to a disappointing 8+km as the 2nd stage motor experienced a catastrophic anomaly upon delayed ignition. 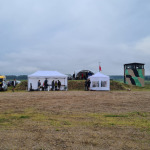 After missing out on the LRE launch event in 2020 due to COVID,  the rocket had been stored for over a year. So after a 2 year Drawsko intermezzo we were eager to launch this two-stage rocket in the summer of 2021. This year  we were able to align our launch schedules and meet up with friends from Austria and Slovenia. The trip to Poland was uneventful and it was nice to see the high way entering Poland to Drawsko had (almost) opened up after years of road construction works and structural detours.

Weather forecast for the launch weekend was: rain but mild winds on Saturday and strong winds but mild weather on Sunday. We decided to set up the launch rail and prepare the rocket on Saturday so we could use the Sunday to drive back to the Netherlands. As usual, safety briefing at the muster point in the morning. After which the 30min drive to the Mielno range began. With only 2 persons this year, erection of the launch rail took about an hour and a half and was set at a small angle away from the launch site. The process of setting up the rail and prepping the rocket was interrupted several times due to local showers. Weather forecast showed heavy rains in the afternoon but from satellite images, rain radar and some interpolation it could be seen that after 17:00 blue skies would arrive at the launch site. After sitting out a 3 hour shower the already prepped rockets were quickly loaded and stacked into the rail. Once the weather cleared up we were second to launch at approx. 17:30. The thermite igniter quickly started up the P-motor and with an incredible roar the 60kg rocket accelerated with approx. 10G’s from the rail. After booster motor burn we couldn’t visually track the rocket anymore. The TALKY GPS tracker kept sending its APRS messages but a 2nd stage smoke trail could not be seen other that an tiny white spec in the sky. Quickly it was concluded that the sustainer hadn’t ignited properly as we started to see a decrease in altitude from the tracker messages. The decent rate indicated that the rocket had parachuted but it was descending slower than normal. Meanwhile we heard the sound of the BOOSTAR-TWO rocket coming in ballistic. Quickly followed by the sound of a second part coming in ballistic. Luckily, this part was spotted by some of the spectators and came in sideways. As it proved this was the fully loaded sustainer motor including fins but minus the top 10% of the motor which was sheared of. The motor had landed in a small pile of low density dirt and other than the damage to the top, it was recovery largely intact and was easily pulled from the ground by hand – no shovel needed.

After a long decent we finally lost the sustainer tracker signal at approximately 7km from the launch site at an altitude of 150m. With the Kenwood radio connected to the RocketLocator app over Bluetooth we could see the last message was directly above a small lake surrounded by a dense forest so the hunt for the sustainer began. With some 30min of off-roading by car through beautiful sceneries and a 5 min search on foot, sure enough we found the sustainer hanging in a tree 20m high. With no ladder or saw we had no other option than to drive back to the launch site (30min back to base, 30min back to the rocket). What followed were some comical acrobatics but eventually were able to cut of one of the branches and both branch and sustainer landed on the ground. We could see that the forward bulkhead and motor coupler were still attached to the shock cord and the rest of the rocket.

After taking down the launch rail and packing up the trailer it was already 21:00 and we quickly sped to the local pizza place for a beers and rocket talk.

On Sunday morning we briefly looked for the booster but it is likely burried up to its fins in the ground. We did found the fly away rail guides which had functioned perfectly and can be re-used for the next flight!

These are just some observation on what might have caused the GIGA IV sustainer to fail:

Once again we would like to thank the Polskie Towarzystwo Rakietowe (PTR) for enthusiastically hosting this LRE summer 2021 event and sharing the best launch location for AER in Europe. 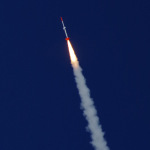 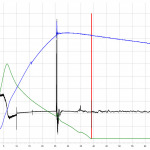 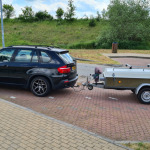 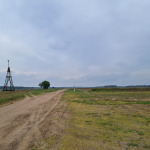 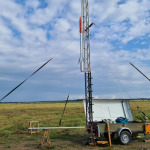 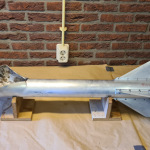 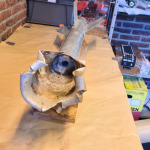 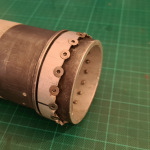