Thursday 18.09.2012 – The day started out with rocket preparations and assembly of the motor. Prior to this, the recovery charges had been prepared and a new 9.6 battery inserted. The old battery dropped its voltage after one year to 8,0V. So although common practice it really pays off to replace or recharge the flight control battery before every flight. The parachute was folded and the cable tie cutter was placed by means of 3x 2,5x100mm cable ties since I ran out of the preferred single 2,5x200mm cable tie. The propellant grain for the Thrust motor of the H13cwas checked and looked perfect. An old booster grain was used which I had lying around. Assembly of the DECA IV took placed at the designated area on the military shooting range OTCVust from 17:00 till 19:30. Previous to this we had some troubles of the Beeline GPS tracker not transmitting its position and only working intermittent. This was not until the last moment tracked down to a loose cable connection between GPS receiver antenna & the BRB unit and was fixed by taping the cable under slight tension. Rocket inspection of the DECA was finished and some comments were made with regards to the intentionally high static margin of 4.83. However the weather forecast predicted light winds from a favourable South-Eastern direction and clear skies. Around 19:30 a we joined the other NERO members at the hotel for a pleasant rocketry-talk infused dinner and we ended up for drinks in the bar till the small hours. Topics passed like static tests of: 45kg ZnS motors, the occasional close call in the ’70s & ’80s to remind every body “safety first” and lesson learned the hard way. 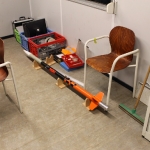 Friday 19.10.2012 – With the much deserved bacon & eggs breakfast, the aftermath of the beers quickly disappeared and we headed out the the OTCVust shooting range. Since the launch site is only being a mere 8km away from the hotel we arrived there at around 9:30. Final preparations and payload integration of the rockets DECA IV (aka H14d) and the H13c were easily completed.  After receipt of the latest meteo forecast, the launch rail was erected and set at 65° azimuth and 85° elevation. First up would be a 4500Ns static test of a single use Glass Reinforced Polyester PVC KNSB motor from MU of the DARE. Motor was designed to actually test the limits of the motor to increase reliability of subsequent milder versions of the motor. Test set was a simple wooden rig, a person scale, mirror and video camera recording the analog scale output. After the range was cleared and a 10s count down the motor ignited and spectacular CATO-ed spitting out the forward closure and sending the rest of the motor 20m skywards leaving lots of clear white smoke and a damaged test rig. This also shows that the OTCVust is a perfect place to test such motors. 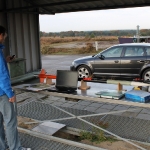 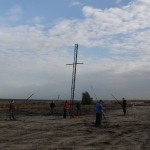 DECA IV – joining of the recovery & payload section to the motor was done near the launch rail and consisted out of taping two 8mm (tested with 10mm tapes) wide aluminium tapes to hold both sections and would sheared upon ignition of the 2gr BP apogee separation charge. The GSM GPS tracker & Beeline GPS tracker had been powered up upon arrival at the OTCVust to locate as many satellites as possible. Once again the rocket was inserted into the lower third of the rail with ease. Payload and the outlooking Turnigy camera were activated and secured with three screws. The down looking key chain camera was subsequently activated. The RDAS Tiny flight control altimeter was powered on and started beeping once a second indicating all systems / igniters were functioning. The motor igniter was inserted but got stuck at ¾ way. This was becasue 2 of the 8 bates grains had a reduced core diameter. Likely caused of early core removed while not fully hardened. Keeping in mind that the grains are produced under spring pressure and trapped air is compressed. By not allowing it to fully harden the propellant likely expanded a bit thereby reducing the core diameter. This phenomenon was discovered during coating and concluded not to effect motor performance. However inserting of the motor igniter was not considered. Since the motor igniter was designed to direct the hot BP/MG gasses / particles to the forward closure it was decided (what else was to do) to launch any way as the down side would be neglectable.

Again after the range was cleared and “Bureau Veiligheid” confirmed to proceed the 10s count down began at 11:39. After near instant ignition the rocket leaped out of the rail travelling straight up, no weather cocking and soon to be out of sight leaving everybody surprised. The only thing remained was a white smoke trail while every body wat looking at the sky for a parachute. Meanwhile the BigRedBee tracker kept sending positions. Apogee was expected to be at T+22s. In case of a ballistic trajectory it was expected that after 44s no packets would be received. However more then a minute into the flight positions were still coming in, indicating successful apogee separation. After two minutes or so the Bigredbee messages stopped coming in. However the GSM GPS tracker was also sending every 20s its position which didn’t changed indicating successful soft recovery. Nobody spotted the rocket under parachute nether did the three military spotters in the field. With everybody puzzled whether this was a successful flight GPS positions kept coming in. Soon the GPS coordinates were put into Google Maps which resulted in a landing spot 1800m away from the launch rail but perfectly centered in the width of the field. This position was translated to a more workable position for the spotters in the field. The position was near “ pink panther” a pink painted target tank and a dummy house right next to the road. Sure enough within 5min I got the rocket back in my possession with the military being impressed that two modern rocket locating systems gave the rocket positions while nobody saw the rocket actually landing. Quick inspection showed rocket had functioned perfectly. The outside mounted camera was still attached and the main parachute had deployed as designed. RDAS Tiny beeped out 8.968ft. Soon the files from the camera’s were downloaded and were played back on my laptop. Below a summary of the flight can be found on Youtube.

The surprising results from the RDAS Tiny indicated 58 G’s. A normal burn would be 18 G’s max. So lets calculate what the chamber pressure at 58G’s

Pc = 94.9bar  !! – oeps….  Design pressure of this motor is 60bar. These grains were initially cast  for a launch day in July 2012 and put into desiccator with calcium chloride to remove all moisture. Normally I leave the grains in the desiccator for a week and then vacuum seal the whole lot ready for the forth coming launch day. This time I left it accidentally with the calcium chloride for over 2 months. Although I knew from previous Thrust motor flights that extensive time in a desiccator results in really fast burn rates and unpredictably thrust curves I decided to use the grains anyway. Normally the DECA 8-grain motor is very conservative only running at a chamber pressure of 35-40bar. The casing that been pressure tested up to 90bar so I was quite confident nothing would happen. However upon ignition the rocket left the rail like lighting. The triangular thrust curve derived from the RDAS date also indicates that the ends of the grains were not ignited. For this flight I opted to use meal powder & NC lacquer to coat the grain instead of ground commercial BP to slow down ignition a bit. Next flight I will use regular BP again. 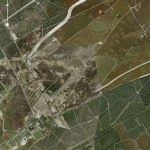 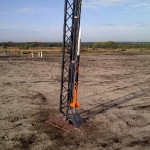 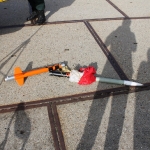 After the launch of the DECA IV rocket, DARE prepared and successfully static tested another KNSB motor.

JV from Belgium joined our launch campaign again. Always good to have a cheerful vastly experienced rocketeer around. His liquid/liquid motor using N2O / Petroleum was incorporated into a test rig fitted in a trailer. The motor test (reference TST 120) started as planned and with an impressive roar burned for what seems a successful 7 second burn time. LD had constructed a minimum diameter 75mm rocket containing a 4 BATES grain KNSB motor with an estimated total impulse of 2300Ns. Simulations put the rocket supersonic to an apogee of approximately 3km. After the motor came to pressure the rocket gently soared skywards with the longest burn of the day. Skies were clear blue and it was not difficult to track the rocket all the way up to apogee after which the drogue deployed. Due the sun and the shiny aluminium finish of the airframe the glinting rocket could again be easily followed until the main parachute was released by a line cutter cutting a fish line. 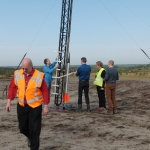 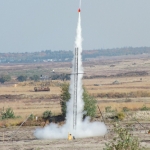 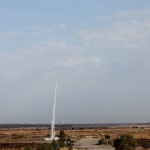 The final rocket of the day was the H13C rocket. Probably one of the most sophisticated rocket in the history of the NERO. Comprising a impressive payload:

Again I made the propellant for the Thrust motor. Although the total impulse of the Thrust is not impressive (2000Ns) it always brings a heavy aluminium rocket fast out of the rail and with a 1 second boost to an apogee of around 1.300-1.400m. This ascent was no different than others. At apogee the drogue was ejected out of a lateral hatch. Set up was that it would pull out the main parachute contained in a sock as well. As the rocket could be tracked falling on the drogue back to the launch site the main parachute never deployed. Luckily the rocket landed in a soft marsh land spot and no damage could be observed at first hand. Upon closer examination of the landing site it was clear that the lines got tangles around the line leading up to the deblocking device. The device had functioned perfectly. However, due to the line being twisted the resistance was to large for the drogue to pull the main out of the tapered sock. 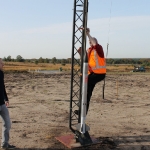 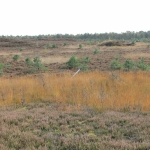 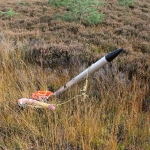 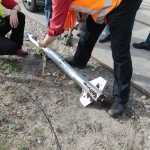 The day was concluded by a second static test – TST 121 – of JV’s N2O / Petroleum motor which fired again successfully.

After round up and packing the tent and launch rail we gathered at a local restaurant for a quick bite and some drinks before driving home again. To conclude, this was one of the most successful launch campaign of the NERO. Beautiful weather, impressive rockets and a packed programme run with military precision – just the way a rocket launch needs to be.