Already the 4th flight with my Intimidator 5 rocket on an experimental baby M-class sugar motor going to 2200m. This time on a KNSU PG reload.

For this flight I tried the KNSU + 1,9% propylene glycol mixture (1,9% is nett added mass) as I was looking for higher thrust and a shorter burn. With a higher thrust I can use the same motor as a booster in a 2-stage configuration – as well as the interesting outcome what different candy propellants do in the same motor / rocket. Propylene glycol was tried to improve pourability / casting and only added just prior to pouring. After simulating in SRM 2014 and reading up on KNSU on Scott Fintel’s site I got a little concerned on KNSU RIO Pmax so I conservatively tried KNSU + PG. Supposedly making no little to no difference in burn rate. SRM indicated a burn time of 1,6seconds for straight up KNSU.

Most likely I will not use this propellant in a future motor again. I pefer casting KNDX with better density any time for an equivalent thrust curve. The addition of propylene glycol improves pourability but any true benefits are questionable and it’s likely surpressing the burn rate of KNSU a bit (although I haven’t valided this with a KNSU reload).

Onboard electronics included a RDAS Tiny for flight control, back up experimental timer, Mobius action camera looking down with a 3D printed camera shroud. Payload comprising of a BigRedBee – Beeline 70cm GPS 100mW tracker. All fast but safely recovered under a 72″ Iris Fruity Chute. 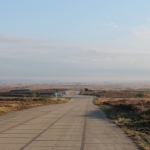 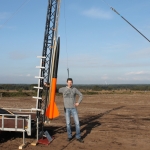 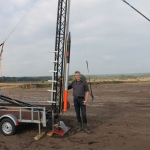