This would be my first international launch campaign and took place in Belgium – Bertrix. This is a military air strip near the border with Luxemburg. Organisation was done by the Vlamisch Rocket Organisation (VRO) toghether with the host: European Space Center (ESC). The ESC was about 28km from the launch site and also served for rocket preparations and sleeping quarters.

I left around 13:45 and after a 3 hour drive  (320 km)  arrived at the ESC. Together with the participants we drank a cold beer in the sun after which diner was served. The evening was used to prep the H11b. Similar to the first launch and due to the lack of complicated payloads the preparations went quick and without problems. The safe / arm test was performed out side the building after which the rocket, excluding the motor, was ready. Because of the experimental nature of the motor some safety concerns were noted and it was decided to launch the rocket at 14:00 the next day. An hour before the spetators would arrive. 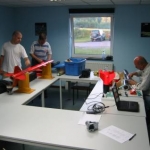 After 11:00 it was time to drive the 28km to the launch site and set up the launch rail. With some help we were able to lift it. The VRO was missing a crucial part of their tower and drove back to the hardware store to buy the missing part.

JV was planning a static test of a H2O2 kerosine motor. This was static tested at 17:00. The first try the motor failed to ignite and the start up sequence was aborted. The second try resulted in a spectacular CATO with debris flying as much as 200m from the site. Due to the necessary safety measurement no body got injured. It did serve as a reality check for everybody. Unfortunately I taped over the entire event so no movie clip available.

at around 18:00 it was time for BK to launch his rocket. The rocket named Castor was propelled by an experimental Candy motor. The casing was made out of glassfiber/epoxy with and bakeliet nozzle. In low winds, just before the gail force winds, was his rocket launched. Apogee was 1020 m. Unfortunately the rocket landed in a 20m high tree and would only  be recovered (in perfect condition) by a professional tree climber the next week. After the launch a storm broke loose and ended all activities for the day. 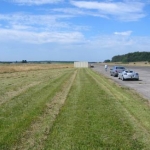 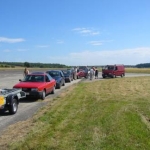 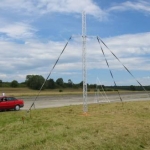 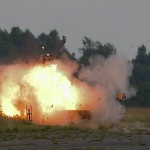 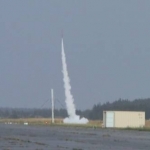 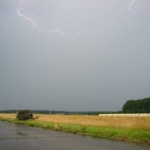 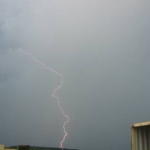 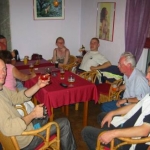 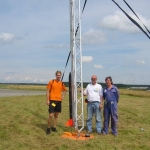 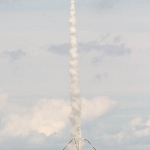 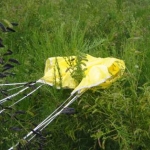 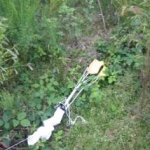 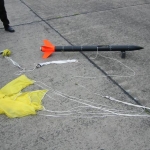 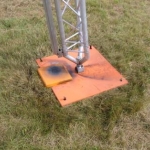 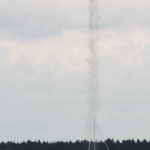 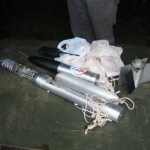 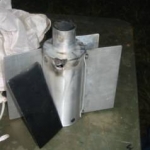