So it is time for a new rocket, a minimum diameter one. With this new rocket the need for a custom nose cone arises. After some consideration and positive builds by “cryoscum” on Australian Rocketry Forum I decided to make a foam nose cone with wet lay up. Just to test this principle as I had made nose cones from negative molds in the past already.

Some design starting points:
The 86x3mm motor casing has an outer diameter of 86mm and I decided to use the same tube as an airframe to keep the design simple with materials already on hand. Furthermore, convenient coupler material was available in the form of 80x2mm aluminium tube. So I needed to make a nose cone with an OD of 86mm and an ID of 80mm, resulting in a wall thickness of 3mm. A bit thick but a compromise to stick with the KISS design.

To start, I needed a profile box so I drew up a equation driven arc in SolidWorks with an offset of 3mm so I got a 80mm OD foam nose cone plug. The .dxf output file was sent to Snijlab.nl and soon after my laser cut 9mm MDF plate arrived. The profile box was quickly glued together with some 5min epoxy. Some rectangular shapes included in the cutting file were glued on the bottom the keep the box nice and square. 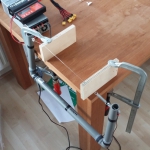 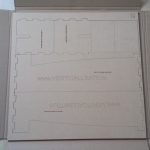 As 15mm central spindle made out of central heating pipe was used to keep things concentric. EPS foam plates from the hardware store were cut in 100x100x50 squares with a jig. A 13mm hole (smaller than the 15mm pipe) was drilled roughly in the center. These 100×100 plates were sprayed with EPS suitable spray adhesive on both sides. A pointy head inserted in the 15mm pipe helped stacking the plates on top with each other. A DIY hot wire bow was connected to my LIPO charger which has a hot wire function. The 0,4mm nichrome hot wire settings were calculated with an online calculator and worked like a charm. Important lesson I had read this on the internet, is to pull the hot wire from nose cone tip to shoulder due to sagging of the wire. The reason makes perfect sense when starting hot wire cutting. The foam plug after hot wire cutting looked like a 16-32 segment polygon, a bit of free-hand sanding removed the hard edges. Not to rigorous because it is easy to remove too much. 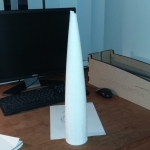