I started out making a truncated gore pattern and a spray template out of cardboard. The template can be downloaded from here: 86mm Von Karman nose cone / spray template. The two A4 papers can be easily aligned with tape and secured to the 1mm thick cardboard with spray adhesive. You will have to fabricate two of the same templates. One for the truncated gore pattern and another one for the positive / negative spray template. The cardboard can be easily cut with a sturdy pair of scissors. Furthermore I used a water based felt tip pen to mark the gore contour on the glass fiber and added a centerline for alignment as a waterproof marker line will dissolve in the epoxy blurring the lines. Sprayed the glass fiber edges with a light coat of hair spray to keep the glass fiber from fraying and using the spray template to make sure the rest of the glass fiber was kept clean of hair spray – keep the hair spray coat as light as possible as over doing them will make the glass fibers stiff. Finally I cut out the gores with a pizza style rotary cutter (much better than using scissors or a conventional knife). Used aluminium foil to store the separated gores without much fraying. Indexed the nose cone plug in six parts again using a water based felt pen.

Prior to the lay-up I estimated the epoxy batch size. Totals of the 280gr/m2 twill glass fiber cloth are approximately: 1,53m2 for 24 gores which includes cutting loss (24 gores x l x w = 24 x 0.51x 0.125m). This results in 428gram glass fiber and with a 50:50 glass fiber / epoxy ratio this boils down to an initial batch size of 430gr epoxy. Due to the pot life multiple smaller batches are required and spread over the two – 12 gores – lay-up sessions. Since the above estimate includes the glass fiber cutting loss already no extra epoxy required. Update: 20161108 – Actual used epoxy = 160gr epoxy for 12 gores.  100grams batches are too large. Therefore use 50-70gr batches.

Wetted out the sanded 3d printed plug and coupler, laid down the gores from tip to shoulder using the center line as marked on the glass fiber gore and the nose cone index line. Used a 30mm wide brush and cut down the hairs to approximately 10mm. As from approximately < Ø30mm, the 280gr/m2 twill glass fiber didn’t follow the tip of the nose cone contour so well as the perpendicular gore fibers stand out. The bulging glass fiber became a challenge to handle after 6 out of 12 gores were laminated and the tip laminate was easy to shift / disturb over the plug. So I waited for the epoxy to fully harden, sanded down the laminate with 80 grit sand paper. Surprisingly, the second session of the remaining 12 gores seemed to better grip and little to no sliding / movement was noticed and the wet lay-up stayed nicely in position without bulging. Possible solution for the first 12 gores session would be to laminate a single light wrap of glass fiber around the tip and allow it to reach leather stage. Than continue with the first 12 gores however this would require a 3 stage wet lay-up. Alternatively some sort of heat shrink tubing to force the laminate to follow the nose cone plug is also possible.

The wet lay-up of 12 gores takes about 90 minutes. Hence 3 epoxy batches with a pot life of 30min each are required. The total of 24 gores should make up for a 4,8mm wall thickness which will be machined down to 3mm. 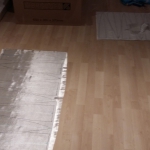