UPDATE 20170907: Due to the KNER propellant misbehaving during casting, I opted not to invest any resources in this KILO 12G KNER project anymore.

What I noticed during casting KNER in the casting tube is that the solid KN particles settled towards the bottom of the grain. Leaving 25mm of plain ER at the top. With the normal spring-tensioned plunger type casting set-up the ER quickly “froze” which resulted in large air pockets (not bubbles). This phenomenon was also experienced by SF. The easy fix would be to overcast the grain / casting tube with KNER and cut 25mm of the top. This would result in and oxidizer rich KNER propellant which would have hurt the Isp. Since I had already cut the casting tube to the correct 135mm length and I didn’t feel cutting 12 casting tube with 25mm over length and cutting KNER grains I abandoned the KILO 12G KNER motor.

New motor hardware to have another go at 12 grains. So what is different with this motor over the original KILO 12G KNSB motor:

Velocity based erosive burning – As a rule of thumb I used a very conservative port-to-throat area ratio of 1.5 in all my motors designs over the past 10 years. For the ill-fated KILO 12G this resulted in a rather high average Kn of 700 and a MEOP of 100-130bar. In hind sight this 1.5 ratio is outdated and according to online literature “Erosive burning design criteria – Charles Rogers” values between 1.1 – 1.36 are acceptable. By increasing the nozzle throat diameter from 20 to 23mm and keeping the core diameter the original 25mm a new Ap/Ath ratio of 1.17 was realized. This increases the chance of velocity based erosive burning at ignition but the advantages of lowering the overall Kn outweigh this risk. As a direct result of increasing the nozzle throat diameter the average Kn was lowered from 700 to 530. This lower Kn in combination with the KNER propellant also results in a better manageable MEOP 50bar.

Mass flux based erosive burning – By chosing a slower burning KNER propellant at lower Kn the theoretical mass flux was cut in half from 6.87gr/s-mm2  to 3.43gr/s-mm2. The KNER will be hard to ignite so we are anticipating a delayed ignition with the regular BP/Mg booster charge.

Hardware – No big changes here. A static test casing of 90x5mm and a flight casing of 86x3mm were machined. Since I cut the casings before I decided to increase the nozzle throat diameter I had to change the convergent angle of the nozzle from 45 to 38,5° to fit the nozzle geometry in the same length. Nozzle material is the same tough EK20 graphite from the SGL Group. It’s very aggressive on the tools and a headache to machine. For this test I decided to keep the material the same but some new fine isomolded graphite has meanwhile been ordered. 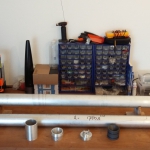