The nose cone avionics of the GIGA II have been re-built after the CATO. Keeping the original basic design with some minor modifications. One of the failure modes evident was that the nose cone tip with central M6 threaded rod was missing and ripped itself, including the nut, through an aluminium U-profile taking along the G10 board holding the electronics with it. Mitigating action is an added washer between the profile and the nut. However it is expected that is a similar CATO happens the same failure can happen again.

Improvements:
The downward looking Mobius mini camera was re-located from an outside camera shroud to be housed inside of the nose cone looking out. The design of the nose cone electronics is dictated by the rather large 4000mAh 2S LiPo and keeping it centered in the nose cone to reduce the likelihood of coning as much as possible. Re-using the original nose cone – with the hole for the pull pin switches already drilled and prevent drilling any extra holes – proved quite the engineering challenge. So, although the arrangement of parts and electronics can be more compact, it is a result of existing rocket parts. In the Mobius GUI the “auto record external power” was toggled to start the recording. The camera was connected via a pull pin switch and step down converter set to 5V to an angled USB mini cable. 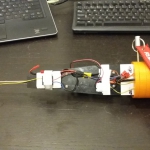 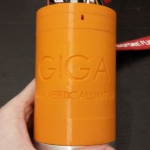 Similar to the nose cone avionics the GIGA II electronics bay has been re-built from the ground up after the CATO. Almost all components were replace with new replacements such as: RDAS Tiny, battery holder, pull pin switches, U-profiles and G10 board. The basic design was kept the same but the CATO of GIGA I showed two failure modes which are mitigated by design improvements: