A 3D printer camera shroud for the Mobius Mini was ordered from Additive Aerospace. However upon closer inspection I noticed the design could be optimized a bit for the GIGA rocket being:

Results: the camera is now accurately aligned to the airframe by means of two M3 bolts and the status LED is now facing the operator arming the electronics. 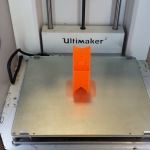 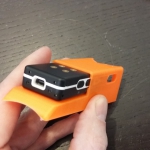