Pull pin
Consisting of two-piece pin where as one part can remain in the rocket during preparations and a second part containing the “remove before flight” tag can be screwed on/off during assembly. With the Intimidator 5 we noticed that a protruding pull pin, especially in combination with parts / coupler pieces which need to slide into each other, can mean that some electronics are armed during assembly of the rocket. While arming electronics such as a GPS tracker aren’t much of a concern. It’s a different situation when the altimeter is connected to live deployment charges or possible even sustainer ignition. Hence the need for a two-piece design to isolate the pull pin in the rocket. When treading the two parts together the rotation of the internal pin is blocked by 2 flat surfaces filed onto one end of the pin. The “switch array” which accepts the pull pin has corresponding flat surfaces and is made on a 3D printer. More info on the switch array below. The internal pin has a male M3 thread, the external “remove before flight” part has a female M3 thread and an aluminium socket soldered on the other end for easy attachment of the key ring. I found it easier / better to put solder on the pin first and then insert into the socket for a more secure bond. Having the 2 parts slid into each other, heated together and rely on the solder to creep into the crevice didn’t quite work out for me. 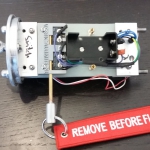 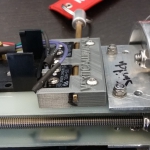 For the cannons I chose 16x2mm aluminium tube which conveniently accepts M16x1 metric fine thread while still leaving 1mm wall thickness. L/D of the deployment cannon is approx. 10: 1 which results in 120mm internal length. 15mm is taken up by the maximum, initially anticipated 2gr BP charge (pending ground testing of the deployment charges). For simplicity the igniter leads are conventionally fed from the outside of the electronics bay into the cannon which is flush with the bulkhead. The plug which seals the cannon inside the electronics bay is press fitted into the tube, locked in place with a small nail and sealed from the inside of the cannons with a layer of 5min epoxy.

Electronics
A single RDAS Tiny is used as the altimeter. Deployment charge igniters and sustainer ignition are soldered directly to the wire loom eliminating screw down terminals. The whole electronics bay and deployment charges can be prepped in advance ready to be inserted during rocket assemble.