This write-up of the core burner test is condensed as it is very similar to the test performed with the hybrid finocyl / core burner test. On Friday 21st of February the KILO core burner motor was static tested on a 66/12 reload. This was motor was designed for maximum volumetric loading, lowest core mass flux thus reducing erosive burning at start-up and followed by an expected progressive thrust curve.

Upgraded igniter consisted of a 4gr CuO/Fe03/Mg thermite 10mm heat shrink tube igniter inserted in a 20mm heat shrink tubing with mix of 6gr thermite and 8gr of plain APCP shavings sealed with some toilet paper rolled up into a ball.

Chamber pressure and thrust was again independently measured. After days of rain, the weather was dry and partial sunny at 9°C. After a 5sec count down the remote controlled ignition was pushed, the igniter popped the thermite charge and after 6 seconds the motor came up to full pressure. Thrust profile showed an expected and acceptable erosive spike at start up followed by a progressive burn and 3-4s tail off. Basically the thrust curve is all over the place but a good sustainer motor. The motor reached a total impulse of 16.780Ns at a Isp of 215s. This motor delivered 6.300Ns or approximately 60% more total impulse than the previous KILO 5GXL sustainer motor which flew in the GIGA III.

For now,this test concludes the development for the GIGA IV sustainer motor which is now flight ready. 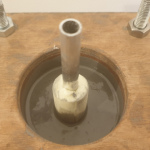 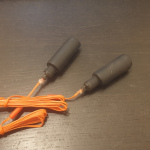 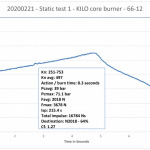 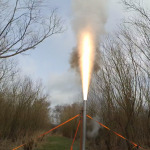